Note: As global regulators continue to consider whether and how to regulate various components of the digital asset ecosystem, we think it is important to share our perspective on how a practical, responsible, and thoughtful approach to regulation might look. This post is not a comment on the current regulations surrounding stablecoins, a legal interpretation of them, or advice on the suitability of transacting in or owning a given stablecoin. This post is an exploration of what a hypothetical new regulatory framework for stablecoins could look like, engineered towards solving for key regulatory priorities and preserving critical usability features.

As the cryptocurrency industry matures, it’s vital that a robust regulatory regime grows alongside it which takes seriously its duty to protect consumers, ensure transparency, and prevent illicit activity, while still allowing for innovation and growth.

Stablecoins play a crucial role in the cryptocurrency ecosystem; the majority of all transactions in crypto are settled via stablecoins, and they are one of the most promising payment tools for the broader financial sector. It is also, as of now, unclear exactly what regulatory regime stablecoins will end up being placed in.

What is a stablecoin?

Let’s start with the core question: what exactly is a stablecoin?

There are a wide variety of stablecoin designs that have been utilized in the cryptocurrency ecosystem. For illustrative purposes, in this article we will assume a stablecoin on the US Dollar, although parallel assets do exist on EUR, GBP, and other currencies. We will also imagine that it is 1:1; that is, 1 token represents 1 US Dollar. We will imagine that the token’s ticker be STBC.

In this construct, this imaginary stablecoin, STBC, is a blockchain-based asset that can be exchanged for a US Dollar. That would typically be accomplished through the following mechanics and arrangements:

Token: a blockchain-based token, STBC, where one token represents \$1 (as supported by the creation / redemption process, described below). These could be issued by a private company, a central bank, or a decentralized protocol.

Creation/Redemption: In order to create 1 STBC token, an eligible user must send \$1 to the reserve account. In return, the protocol mints 1 new STBC token and sends it to the user.

Similarly, an eligible user may send 1 STBC token back to the protocol to redeem it for \$1. The protocol destroys the token and sends \$1 back to the user.

What are the benefits of stablecoins?

We believe that stablecoins are one of the most important innovations of the cryptocurrency industry.

Let’s say you want to send \$20 to a friend. What are your options?

a) You could hope that both you and your friend use the same peer-to-peer transfer app (e.g. Venmo), and then separately each of you figure out how to send money to/from that app.

b) You could send a \$20 wire transfer to your friend. This would likely take a day and cost \$5+ in fees; and if it’s international, it might take a week and cost substantially more in fees.

c) You could send \$20 via ACH, if both you and your friend use US-based USD bank accounts. Then, the transfer would not fully settle for months, exposing both parties to “chargeback risk”.

e) You could send 20 STBC to your friend’s cryptocurrency wallet; if you use an efficient blockchain (or both use the same exchange), it will arrive in less than a minute, costing a tiny fraction of a penny in fees.

Option (e), the stablecoin, has a compelling case here as an efficient means of transfer.

Taking our real world use case a step further, consider that a user wants to build a blockchain based application. How should the application’s users contribute and withdraw assets?

Here, the users face the same potential options and cost structures as before; once again, stablecoins are the cheapest, safest, fastest way for a user to engage with that application.

What are the risks of stablecoins?

There are three major intertwined risks associated with stablecoins.

If the stablecoin is backed by something other than US Dollars in a bank account, the asset might depreciate against USD. If, for instance, you were to back a stablecoin with 1,000,000 tokens issued with \$1,000,000 of the SPY (S&P500) ETF, and stock markets decreased 5% in price, you would be left with only \$950,000 backing 1,000,000 stabelcoins–meaning that the “stable” token had in fact fallen in value, at least in regards to the reserves it is purported to be redeemable for!

Unlike investment products where customers gain from appreciation in the assets backing the product, there is generally no way for a stablecoin to be worth more than \$1, as customers can always create more for \$1 each. This means that the core philosophy behind the assets backing a stablecoin should be to focus on assets with low volatility which are very similar to USD. US Treasury bonds may be an appropriate asset for a stablecoin’s reserves; if Bitcoin is used, it has to be overcollateralized to an extent that there is very little risk of loss to the stablecoin holders. Backing 100 stablecoins with \$101 of BTC is untenably risky: a mere 2% decrease in bitcoin markets would cause the stablecoin to be under-backed and no longer fully redeemable for \$1. Backing 100 stablecoins with \$400 of BTC, on the other hand, is substantially more defensible, as there is very little risk of a 75% move before the reserves would have a chance to de-risk. Any stablecoin issuer or designer must have a transparent, robust risk model to mitigate the volatility of its reserves, including determining which assets are appropriate for its reserves.

A related worry is that a user might own 1,000 STBC, go to the issuer to redeem their STBC, and be denied.

This might happen if the reserves had in fact run out of dollars and so there was nothing left to redeem STBC for; this would likely imply the reserves had not been in USD, and had fallen in value.

Alternately, this could happen if the issuer arbitrarily decides to block your redemption, possibly to try to keep more impressive metrics for STBC.

Either way, the lack of ability to redeem (or a lack of transparency related to redemption process and requirements) presents a risk to the user.

One final risk of stablecoins is that they could be used for financial crimes, or to finance illicit activities.

Any stablecoin issuer or designer must include creation, redemption, and use mechanics that, in harmonization with regulation, address and avoid this use case.

What is a sensible stablecoin regulatory framework?

As noted above, we believe that stablecoins have presented a significant positive use case to the world, and they continue to hold the potential to revolutionize the payments and remittances industry. Stablecoins could in the future revolutionize the payments industry, drastically reducing friction and transaction costsa, delivering to many around the world the benefits that come with having access to reliable and usable value transmission. As such, we think it is important to ensure that the ongoing regulatory discussions around the approach to a framework for stablecoins be based on a practical structure that solves equally for usability, reliability, transparency, consumer protection, and the identification and prevention of financial crimes.

We look forward to engaging with regulators on examples of what such a framework might look like. There are many different approaches and we remain open and excited for feedback and engagement from regulators and from other participants in the cryptocurrency industry.

As outline above, there are real risks associated with stablecoins, and any framework should work to mitigate those.

As such, while we look forward to continuing dialogue on the details, we would be in favor of a proposal for a transparency-based reporting and registration regime for stablecoins.

a) All stablecoins issued to US users must be registered on an official list of “regulated stablecoins” under the oversight of one or more US regulatory department(s).

b) The registration itself would be focused on transparency and reporting, on a notice filing basis, coupled with clear obligations on recordkeeping, reporting, and regular examination. The regulatory departments authorizing the program would have the ability to decertify registered stablecoins.

c) The registration would involve publishing a daily Reserves List which details what the total net value of the stablecoin’s reserves are, and breaks that down into exact quantities of specific categories (e.g. “100 USD in Bank XYZ; \$95 of short-term US treasury bills; \$50 of Tier-1 commercial paper of US companies; \$30 of Tier-1+ commercial paper of European companies; \$10 of [other suitable assets as permitted by the regulation and by that stablecoin’s registration document]")

e) The registration would require semi-annual audits by an accounting firm to confirm that the reserves are as represented.

f) The registration would require stablecoins to have clear and transparent redemption requirements (e.g. based on Know Your Customer documentation) and a clear customer complaint process if a redemption is denied.

g) To address financial crimes, all registered stablecoins would have to be on a public ledger, and the creation and redemption process must be sufficiently structured in order to ensure that stablecoins associated with illegal activity (as observed via on-chain surveillance and analytics tools, via a suite of standard blockchain surveillance software) cannot be redeemed.

As noted above, this is a basic strawman framework for how the key components of a potential stablecoin registration program might look. Each of these points are designed to preserve the usability of stablecoins while solving for regulatory considerations that need addressing. If designed in the right way, this framework could enhance the ultimate usability of stablecoins. We very much look forward to engaging with policymakers, regulators, and market participants on these concepts. 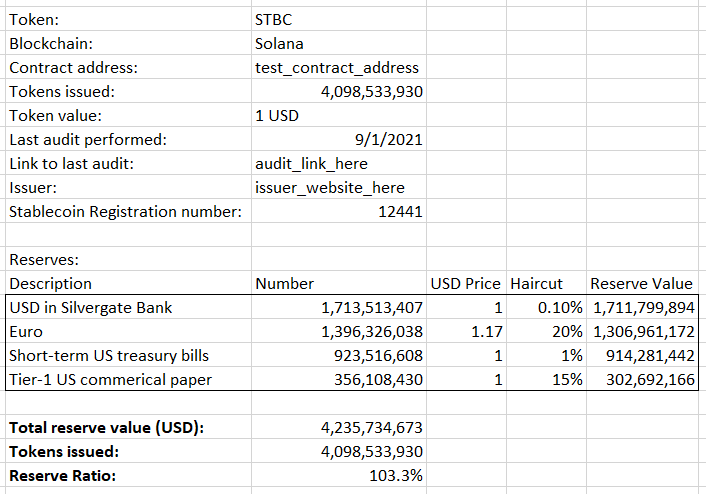